The “last of the last” WWII resisters, Teruo Nakamura refused to believe the war was over and lived in a tiny hut on the Indonesian island of Morotai until he was discovered in 1974 .

Many know the story of Hiroo Onoda, the Japanese soldier who refused to believe World War II was over and did not surrender until February 1974. Although often referred to as the last resister of World War II World War, there is another lesser-known soldier. which was only discovered ten months after Onoda. His name was Teruo Nakamura.

By the 1970s, World War II had been over for nearly three decades. Young soldiers had returned home, started families and entered their fifties. But on December 18, 1974, news broke that a man had never received the end-of-war memo.

Nakamura was discovered on the Indonesian island of Morotai, where he had been stationed in 1944. After a bloody battle in September of that year, Nakamura was presumed dead – but he was actually deep in the jungle of the island with several other Japanese soldiers, ready to carry out a guerrilla war as their commander had ordered.

This last WWII resister emerged after 30 years of living in near-isolation to see that the whole world had changed. The discovery of Teruo Nakamura sparked significant public debate about veteran loyalty, ethnicity and support.

Teruo Nakamura enlisted in 1943, but he didn’t know it would take 30 years to return home

Teruo Nakamura was born Attun Palalin on October 8, 1919 in Taiwan. Also called Suniuo, he was a member of the Amis tribe, an indigenous Taiwanese group. Nakamura was raised in poverty in the mountains of the island.

This cultural diversity would cause a number of debates later in Nakamura’s life. But when he enlisted in the Imperial Japanese Army’s Takasago Volunteer Unit in November 1943, there was little interest in his background.

Nakamura was stationed on the island of Morotai in the Dutch East Indies soon after his enlistment. On September 15, 1944, American and Australian forces attacked the island in a mission known as the Battle of Morotai.

The Japanese soldiers fought hard, but they were heavily outnumbered and suffered heavy casualties. Many of the remaining men surrendered to Allied troops, but some retreated to the island’s thick interior jungle. According to WEATHER, Nakamura’s unit had been ordered to conduct guerrilla warfare under such circumstances. He later told a reporter, “My commander told me to fight.” So that’s what he did.

Over the next few months, many of the remaining members of the Japanese army were captured, surrendered, or died of disease or starvation. But Teruo Nakamura remained with a small group of stragglers, determined to continue following orders even if they had no way of communicating with the outside world.

With no trace of Nakamura’s surrender, the Japanese military pronounced him dead on November 13, 1944. It would be 30 years before his family learned the truth.

Teruo Nakamura lived with several other Japanese soldiers on the island of Morotai for twelve years. Since they had lost radio contact with their commanders, they had no idea that the war was over. When leaflets were dropped on the island in 1945 declaring that Japan had surrendered and the war was over, Nakamura and his comrades dismissed them as enemy propaganda.

Nakamura later told the Taipei Time that he believed the war was still going on because of the planes constantly flying over the island. As aircraft became more modern, he surmised that there was an arms race between the Allied and Axis powers. In fact, there was an Indonesian Air Force base nearby and he saw daily training flights. 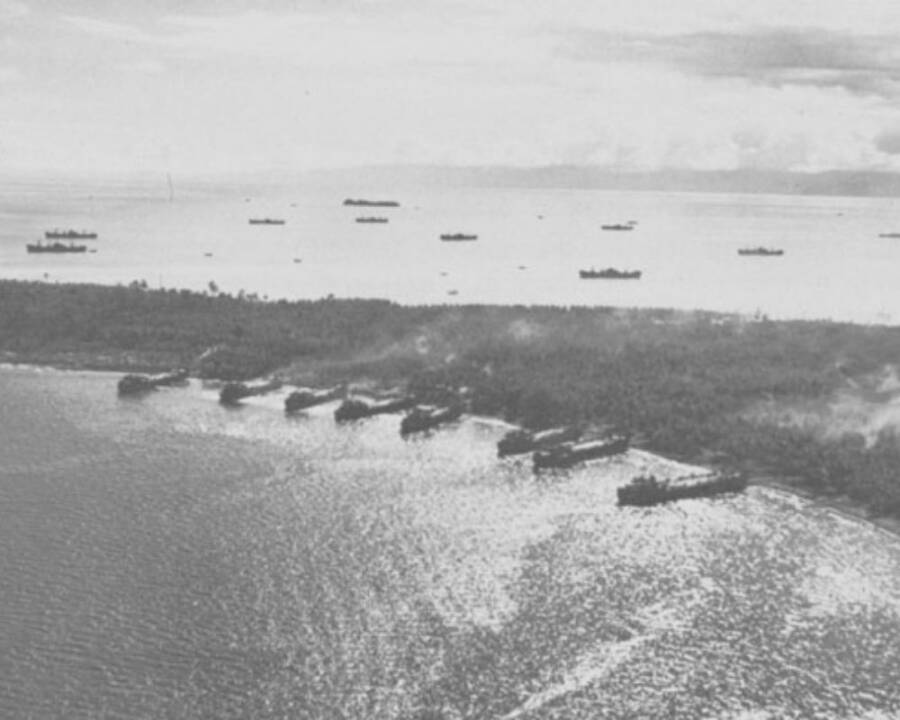 Wikimedia CommonsAllied forces attacked the island of Morotai on September 15, 1944.

In 1956, Nakamura left his comrades and went alone – some say because the other men tried to kill him. He built a small hut in a field and survived by growing sweet potatoes and eating bananas from the trees. He had fun fishing and playing with an abacus he had made. He only cooked when it was dark so enemies wouldn’t see the smoke from his fire.

Teruo Nakamura counted the passing days by observing the cycles of the moon, and he tracked the months and years by tying knots in a rope.

“I calmly stayed alive there,” he said later. “Even though I had no one to talk to, a glimmer of hope and expectation seemed buried deep in my heart. The only trace of happiness during this time was that I was still alive and hadn’t lost my sense of existence yet.

Nakamura continued, “Not wasting my life has become my only goal, and it has taken up most of my time.”

According to Skeptoid podcast, at one point, Teruo Nakamura bonded with a local man named Baicoli, from whom he received basic necessities and creature comforts like tea and coffee. This arrangement continued for several years until Baicoli’s death.

In his will, Baicoli asked his son to continue caring for Nakamura. It is said that the son may be the one who informed the authorities of Nakamura’s existence.

Some reports say Baicoli’s son alerted authorities to Teruo Nakamura’s whereabouts out of concern for his failing health. Others say a pilot spotted Nakamura’s hut while flying over the island.

Regardless of how the information was obtained, in November 1974 the Indonesian government was informed that there might be resistance from the Japanese military living on the island of Morotai, and they worked with the Japanese Embassy to organize a research mission.

The searchers waved a Japanese flag and sang the country’s national anthem in an attempt to coax Nakamura out of hiding. It worked. On December 18, 1974, Nakamura, then 55 years old, made his appearance. He was naked and exhausted but surprisingly healthy.

Nakamura was taken to a hospital in Jakarta, where he received a clean bill of health. The Indonesian authorities then sent him back to Taiwan to be reunited with his family.

When Nakamura returned home, he realized how much everything had changed. His parents were dead. His son, who was a baby when he enlisted, was a grown man with four children of his own. And his wife, assuming he was dead, had remarried.

Then came the question of Teruo Nakamura’s pension.

When he enlisted in the army in 1943, Taiwan was a colony of the Japanese Empire. During his 30 years on Morotai, Taiwan had been placed under the governance of the Republic of China. Although Nakamura fought for the Imperial Japanese Army, the Japanese government did not think they should refund the pension he was entitled to since he was technically not a Japanese citizen.

This caused public outrage. A few months earlier, Hiroo Onoda, another Japanese army troop, was discovered in the Philippines and received all his benefits. The government argued that Onoda was a full Japanese citizen and held the rank of officer, while Nakamura was only a soldier. They first paid him 68,000 Japanese yen, equivalent to about $227 at the time.

After heated discussions in the media and public outcry, the Taiwanese government donated a total of 4,250,000 Japanese yen to Nakamura, a payment closer to the amount Hiroo Onoda had received. 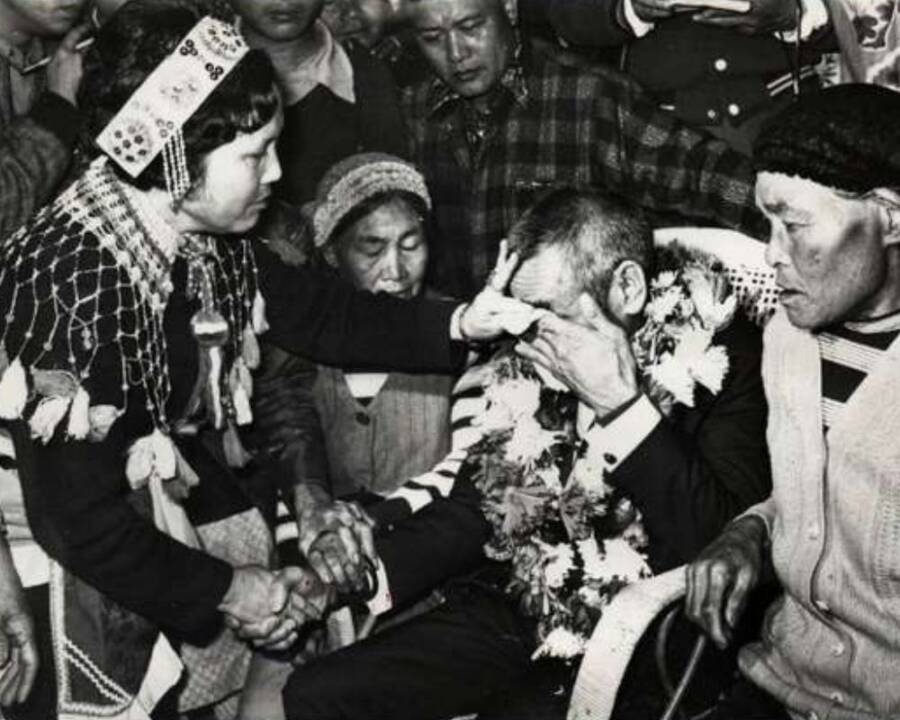 TwitterTeruo Nakamura returned to Taiwan after 30 years to find his parents had died and his wife had remarried.

Upon his return to Taiwan, Nakamura told the New York Times“I’m very tired even though I look healthy, and I’m very excited to see so many people here.”

According to Taipei Time, his wife’s new husband was ready to move out and let the couple reunite. But Nakamura didn’t want to wreak havoc on their lives, so he bought an apartment nearby and often spent time with them.

For the next four years, Nakamura lived quietly and peacefully with his family. On June 15, 1979, he lost his last fight, this time to lung cancer. Although he spent nearly half his life in isolation, Teruo Nakamura left behind a legacy of a brave man and a dedicated soldier.

After reading about Teruo Nakamura, the last WWII resister, check out these other Japanese resisters. Then browse through these WWII photos that most people haven’t seen.