Malaysia and China face off in the South China Sea

The majority of states in the region, with the notable exception of the Philippines, an ally of the United States, have either maintained a strategic silence or, in the case of Malaysia and Indonesia, have openly criticized the agreement. as a potentially destabilizing development in the context of escalating Sino-American rivalry.

Yet in recent days, key Southeast Asian nations have also demonstrated surprising unity in resisting China’s growing footprint in adjacent waters. For the second time this year, Malaysia has summoned the Chinese envoy to protest the incursions into its claimed waters in the South China Sea.

The Malaysian Foreign Ministry this week submitted a four paragraph Note Verbale to Chinese Ambassador Ouyang Yujing in which the Southeast Asian country expressed its “protest against the presence and activities of Chinese ships, including including a survey vessel, in Malaysia’s exclusive economic zone off the coasts of Sabah and Sarawak.

“The presence and activities of these vessels are incompatible with Malaysia’s Exclusive Economic Zone Act 1984, as well as the 1982 United Nations Convention on the Law of the Sea (Unclos),” the statement said. .

“Malaysia’s position and consistent actions are grounded in international law, in defense of our sovereignty and sovereign rights in our waters. Malaysia had also protested against previous encroachments by other foreign vessels in our waters, ”he added.

The vigorous protest came just a day after newly installed Prime Minister Ismail Sabri Yaakob made it clear that Malaysia would not make any “compromise on sovereignty” in the South China Sea.

In June, Malaysia, then under another prime minister, openly accused Chinese fighter jets of violating “Malaysian airspace and sovereignty” and vowed “that having friendly diplomatic relations with a country will not does not mean that we will compromise our national security ”.

According to the Malaysian Air Force, several Chinese military planes, including an Ilyushin-76 and a Xian Y-20, unilaterally formed a “tactical formation” in Malaysian airspace, posing “a serious threat to national security and flight safety “.

Neighboring Indonesia, as well as the Philippines, have also embarked on equally difficult maneuvers to prevent Chinese incursions into their exclusive economic zones, reflecting a hardening of regional resistance to Beijing’s military movements in the disputed waterway.

In fact, major Southeast Asian countries have also deepened their defense and strategic cooperation with outside powers, including major air and amphibious exercises with the United States in recent months.

Historically, Malaysia has maintained relatively cordial relations with China, a major trading and investment partner over the past decades. For its part, Beijing has often taken a gentler approach vis-à-vis Putrajaya in the South China Sea, where several requesting states are at loggerheads.

Former Malaysian Prime Minister Najib Razak and his allies, now back in power, have also relied on China as a major strategic patron over the years.

This is why few observers have been less surprised by Malaysia’s seemingly obsequious stance amid the uproar around AUKUS, when it stressed the “need to seek the opinion of the [Chinese] leadership, especially the defense of China [officials], on what they think of AUKUS and what their action could be.

But over the past three years, Malaysia has gradually revisited its “quiet diplomacy” with China amid mounting tensions in the South China Sea, as well as concerns over China’s so-called “debt trap” diplomacy. Beijing.

Under Mahathir, Malaysia openly threatened China to file an arbitration case in the South China Sea, while openly criticizing China’s broad claims to the “nine-dash line” as “ridiculous.”

Despite the overthrow of the Mahathir administration the following year, Malaysia continued its energy exploration activities. After a months-long battle with Chinese ships, which constantly harassed the Malaysian oil rig West Capella, then Foreign Minister Hishammuddin Hussein stressed: “Malaysia remains steadfast in its commitment to protect its countries. interests and rights in the South China Sea ”.

Soon even the country’s largely ceremonial and supposedly apolitical king joined us, calling on the Malaysian government to “always [be] sensitive to the maritime domain and adopt a strategy that supports our geopolitical aspirations.

This week, the Malaysian government reiterated that “in determining Malaysia’s position and course of action regarding the South China Sea issue, which is complex and involves interstate relations, Malaysia’s national interests will remain in place. of paramount importance “.

“Malaysia reiterates that all issues relating to the South China Sea must be resolved in a peaceful and constructive manner, in accordance with universally recognized principles of international law, including UNCLOS of 1982,” the statement added. 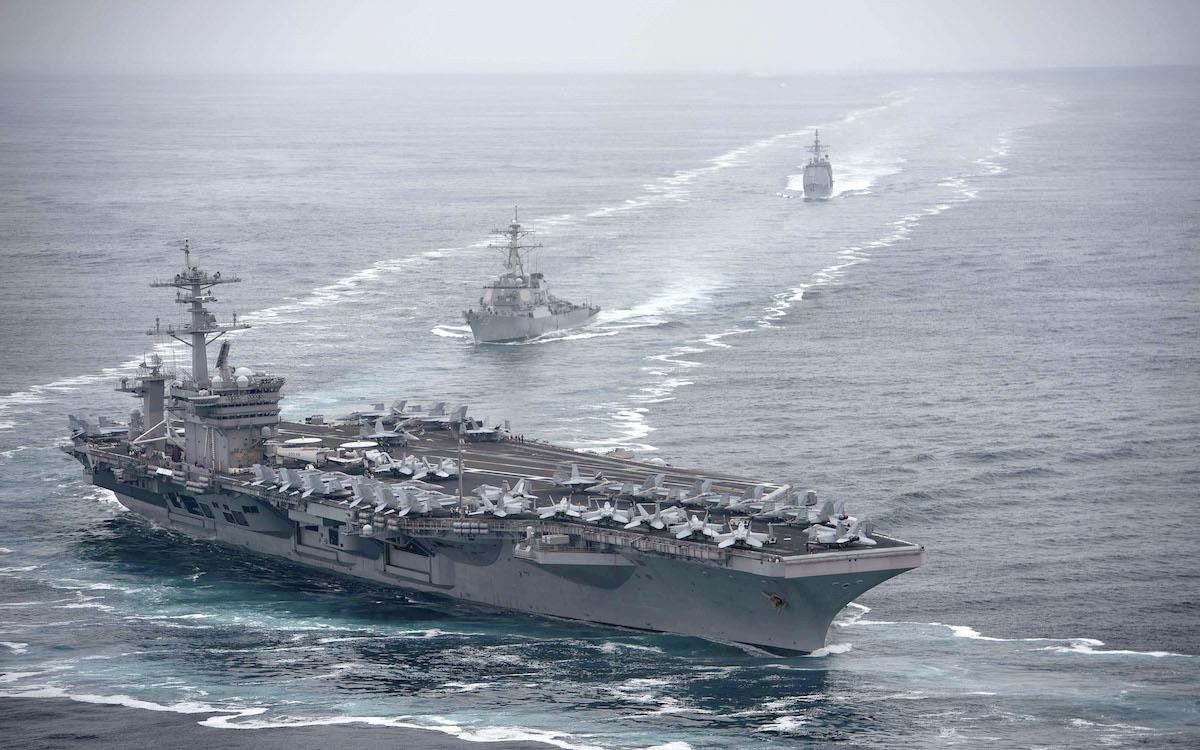 In the same month, Malaysia joined the United States-led Southeast Asia Cooperation and Training Exercise (SEACAT), which saw 21 countries, including major U.S. allies such as Australia and Germany, engage in large-scale exercises aimed at improving “the operating environment, build[ing] capacity for humanitarian support missions, and to maintain[ing] international laws and standards.

Malaysia is not alone in hardening its stance on maritime disputes with China. The neighboring Philippines has also taken an increasingly harsh line against China, especially as Beijing-friendly Philippine President Rodrigo Duterte enters his final months in power.

Last week, Philippine Foreign Minister Teodoro Locsin Jr, who openly supported the AUKUS deal as a “counterweight” against China, filed a new round of diplomatic protests against Beijing over “alarming” reports of new incursions by Chinese ships into waters claimed by the Philippines.

“Now drop our protest against the relentless and illegal restrictions imposed by China on Filipino fishermen from carrying out legitimate fishing activities in [Scarborough Shoal]”Locsin said on his Twitter account last week, reiterating the Philippines ‘opposition to China’s de facto occupation of the rich fisheries zone, which lies well within the Philippines’ Exclusive Economic Zone (EEZ) of 200 miles.

Earlier, the Philippine foreign minister warned that his country would file “daily diplomatic protests” if China continued to deploy paramilitary ships to the lands claimed by Manila in the Spratleys, which experienced a maritime standoff of months between both countries earlier this year.

Last month, the Philippines and the United States, marking the 70th anniversary of their Mutual Defense Treaty (MDT), agreed to deepen their defense cooperation after the full reinstatement of the visiting forces agreement. (VFA) earlier this year.

The two allies agreed to fully implement other key defense agreements such as the Enhanced Defense Cooperation Agreement (EDCA) as well as to develop a new framework for maritime security cooperation to prevent Chinese ambitions in the South China Sea.

While not a direct claimant state in the disputed waters, Indonesia has also stepped up its maritime patrols and naval presence off the coast of the Natuna Islands, which straddles the southernmost tip of loosely defined Chinese claims to nine dashes.

In addition to concerns about illegal fishing in its waters, Jakarta has been particularly troubled by Chinese harassment of energy exploration activities in the resource-rich region. 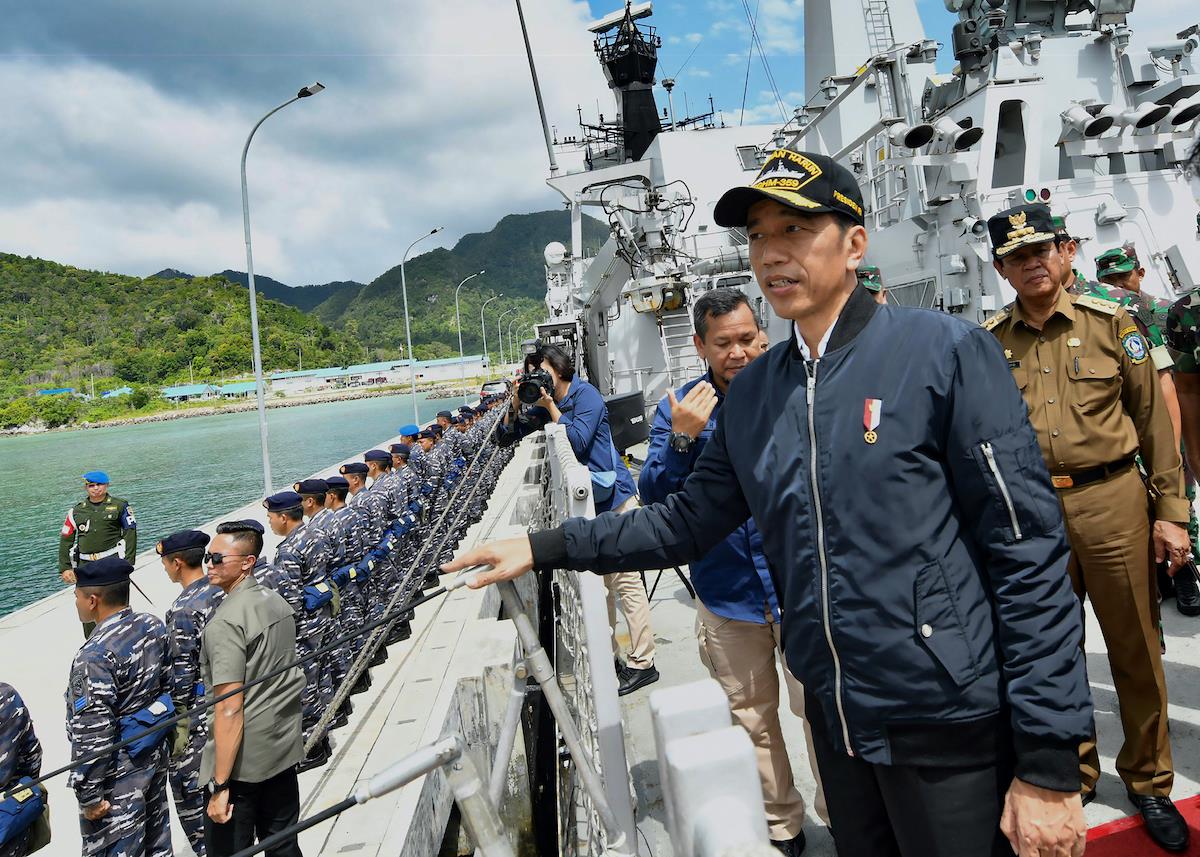 Indonesian President Joko Widodo during his visit to a military base in the Natuna Islands, which border the South China Sea, on January 8, 2020. Photo: AFP / Presidential Palace
Indonesia increases patrols

In 2017, Indonesia renamed its Exclusive Economic Zone off the coast of the Natuna Islands in the North Natuna Sea in an effort to reaffirm its claims in the region. Former Maritime and Fisheries Minister Susi Pudjiastuti also adopted a “sink the boat” policy, which targeted illegal Chinese fishing vessels.

In August, Indonesia also conducted its largest joint exercises, Garuda Shield, with the United States, which saw the participation of more than 4,500 troops and personnel. The two sides hailed a “new era” in their defense cooperation amid shared concerns over a resurgence of China.

Last month, the Indonesian navy deployed up to five ships, assisted by air patrol, to the region in an effort to repel a growing presence of Chinese paramilitaries and coast guards in the region.

“The navy’s position on the North Sea Natuna is very firm in protecting national interests within Indonesian jurisdiction in accordance with national and international law which have been ratified so that there is no tolerance for any violation in the North Sea Natuna, “said the Indonesian. Arsyad Abdullah, Commander of the Navy’s Western Fleet.

No less than President Joko Widodo rang the bell, visiting the Natuna Islands last year amid a stalemate between Indonesia and China in the region. In an obvious show of force, Indonesia deployed fighter jets and gradually expanded its naval footprint in the region.

“There is no negotiation regarding our sovereignty, the territory of our country,” Widodo said during his visit to the disputed area last year.