Hartwig retires from the military after 28 years

Captain Hartwig in the White House briefing room in 2008.

A native of Storm Lake, Major Ryan J. Hartwig, US Army Special Forces Green Beret, is retiring after nearly 28 years of service in the US Army.

Ryan is a native of Storm Lake, graduated from Storm Lake High School in 1995 and the son of Gloria Wilbur. He is perhaps one of the most experienced and successful military personnel Storm Lake has produced.

In 1994, Ryan enlisted in the Iowa National Guard as a Forward Observer in the Field Artillery and learned skills that ultimately saved his life and the lives of the soldiers he led during its deployment abroad. As a member of the Iowa National Guard, he achieved the rank of sergeant, was captain of the wrestling team at Ellsworth Community College in 1995-97, and was a member of the wrestling team of the University of Northern Iowa (UNI) from 1997 to 1999.. In 1999, Ryan graduated from University with Cum Laude Honors while completing his Bachelor of Arts in Teaching at UNI, majoring in Moderate, Severe and Profound Mental Disability K-12 and a Minor in Disorders. behavior in grades 6 to 12.

In 1999, Ryan was awarded two different full college scholarships to pursue a Masters in Education, including scholarships from the Reserve Officer Training Corps (ROTC) and UNI’s Department of Education, and an assistant post. diploma. From 2000 to 2001, he completed his Masters and UNI ROTC Officer Commissioning Program, earning Distinguished Military Graduate Honors in the ROTC Program and publishing a Masters thesis in the Journal of Disability Policy. Studies.

The September 11, 2001 attacks on the World Trade Center resulted in a change in Ryan’s plans. His initial intentions were to join the Iowa National Guard as a Field Artillery Officer and to become an educator in the Storm Lake School System after graduating from graduate school in December 2001. Although before the 11th September, he was supervised by Staff Sergeant Pete Pease. , and Ranger Captain Dave Combs, both UNI ROTC instructors, planting the seeds of Ryan’s interests in their path – and 9/11 solidified Ryan’s decision to pursue a career as an Army Special Operator. . In January 2002, Ryan entered the Active Army beginning his military training at Fort Benning, Ga., Which included Infantry Officer Basic and Ranger courses.

Ryan’s military career was nothing short of great adventure and fast paced. He was a member of the Iowa National Guard for over seven years, the Active Army Infantry for six years, and Special Forces Green Berets for over 14 years. Between 2003 and 2021, it deployed a total of 17 times, including 55 months in total and nine deployments to combat zones. Ryan’s overseas deployments of conventional army and special operations were to Iraq, Afghanistan, the Philippines, Korea, Cambodia, Thailand and a handful of other countries. 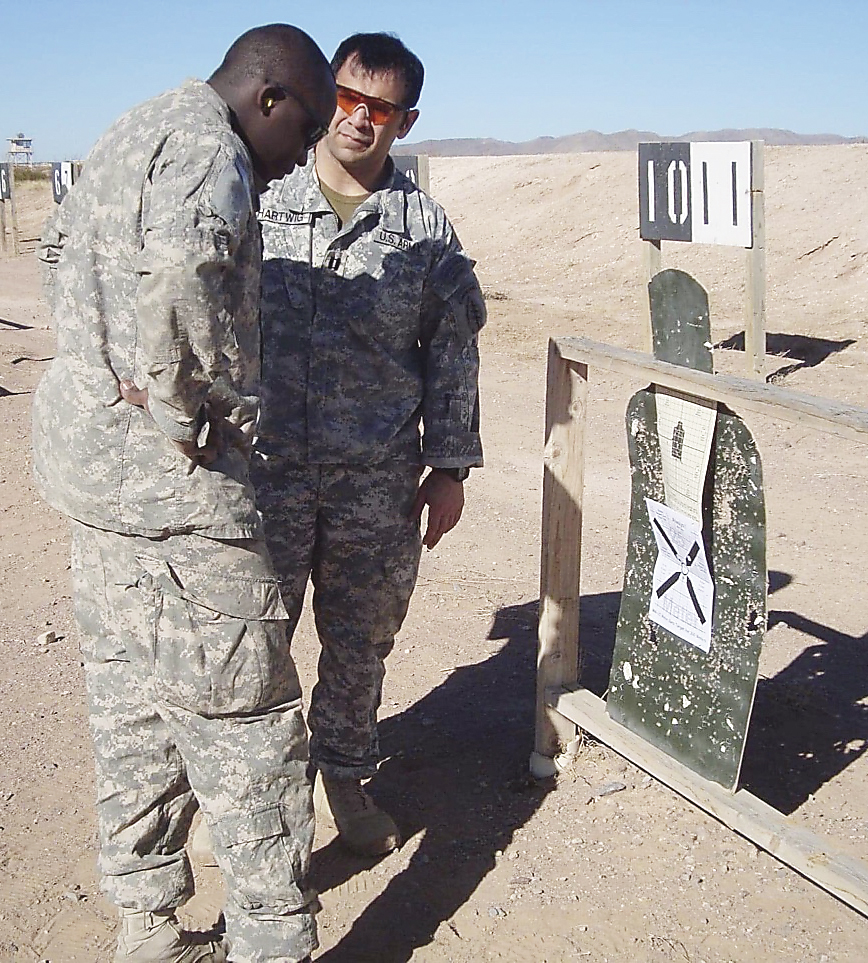 Ryan trains one of his soldiers in shooting
before leading them into battle (July 2008).

Ryan has commanded a number of military units, including an anti-armor platoon along the South Korea-North Korea Demilitarized Zone (2003), a reconnaissance company in Iraq (2005-06); a special forces “A team” (green beret) in Iraq (2008-09), the Philippines (2009-10), Cambodia (2010) and Afghanistan (2011); a Special Forces Headquarters Company (2011-2012) and an Advanced Skills Company (2014-15) at Joint Base Lewis-McChord, Washington and overseas, a Joint Task Force in the Philippines (2016) and a Special Operations Training Detachment (SOTD) at Fort Irwin, Calif. (2018-2020). Importantly, Ryan was chosen to set up the Special Operations Training Detachment at Fort Irwin, a task typically assigned to a Special Forces Lt. Col., and was congratulated by the 3 Star General Officer Commander of the United States Army Special Operations Command (“USASOC”) for his leadership while propelling the unit to world-class mission results in just two years.

In addition, he was selected for a number of key personnel leadership positions, including in August 2016, he was selected to be a member of the 7th Infantry Division Commander’s Think Tank, tasked with relieving a number of strategic, operational and tactical challenges around the world; and in August 2017, he was selected to be the Chief of Operations for the NATO Operations Officer (a 2-star Major General) in Afghanistan, leading an operations staff of 90 soldiers from 32 different countries, in as many languages, and overseeing all military operations and resources in Afghanistan.

Ryan’s accomplishments are significant. In 2005, he finished third in the international competition for the best rangers in the Middle East; in 2007, he finished fourth out of over 2,300 competitors in the Bataan Death March Heavy Class Competition in White Sands, NM, a 26.1 mile marathon race where he carried a backpack weighing over 100 lbs; in 2008, he completed the special forces qualification course as an honorary graduate and received the course leadership award; and in 2012, the United States Special Operations Command (“USSOCOM”) awarded him a full college scholarship to pursue a master’s degree at the Naval Postgraduate School (NPS), Monterey, Calif., which earned him a master’s degree in defense analysis. (political science) and received significant research funding for her master’s thesis entitled A Resource Network Strategy for Afghanistan (2012-2013). 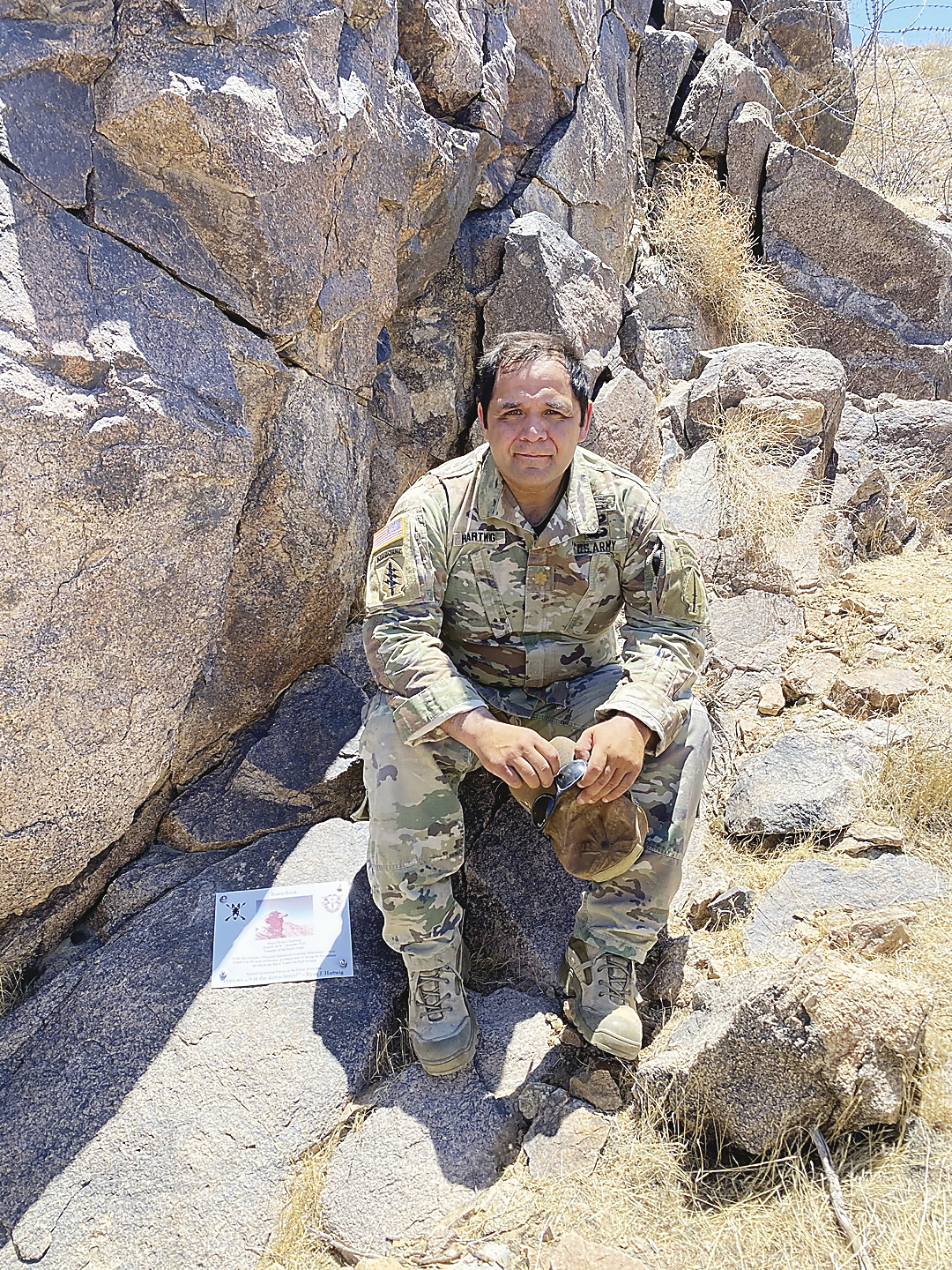 Major Hartwig Deep in the Mojave Desert, May 2021, with the plaque his Special Operations Forces soldiers dedicated to him for his leadership and commitment to the unit.

Upon completion of his service in the United States Army, Ryan plans to invest significant time in raising his children, Beau and Kennedy; continue to mentor the Army Green Berets at Fort Irwin, California; secondary school substitute teacher in history, government, mathematics and civics; continue to run and grow a business he and a childhood friend started; and write about important people and circumstances around the world who are worth mentioning.

Most importantly, Ryan is extremely grateful to the many leaders he was positively influenced by when he grew up in Storm Lake. He is convinced that “it takes a village” to create meaningful results and make a real difference; and the best leaders tell us what we need to hear and know. Many important leaders have influenced Ryan, with the decisive leader and influence on him being his mother, Gloria. She has helped him keep his unit members and himself alive and succeed overseas, doing the right thing whenever obstacles get almost insurmountable, never giving up and representing his family, friends and community in the best possible way. He is extremely grateful and hopes to surround his children with the same type of people he was surrounded by when growing up in Storm Lake – and they will make a difference. From Oppresso Liber!