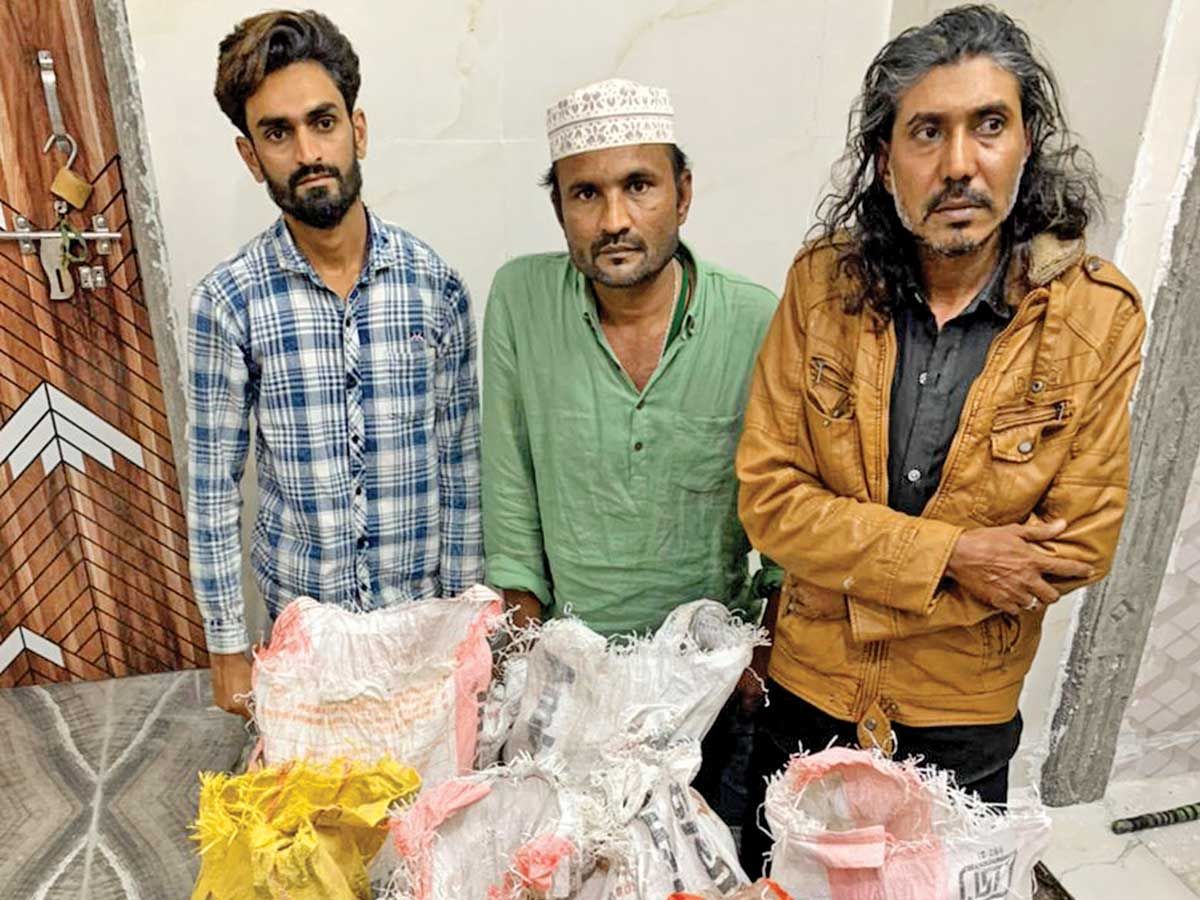 The Gujarat Police Counter-Terrorism Squad carried out the state’s largest drug seizure on Sunday night, with a staggering transport of 120 kg of heroin from Shamsuddin Saiyed’s home in the village from Jinjuda to Morbi. Drug trafficking is valued at Rs 600 crore and approximates the seizure of heroin and methamphetamine worth over Rs 300 crore in Devbhumi Dwarka district last week.
Two other people were also arrested in this case – Mukhtar Hussain Jabbar Jodiya, resident of Jamnagar, and Ghulam Bhagad of Salaya in Devbhumi Dwarka – for trafficking heroin by sea from Pakistan. Jabbar was fleeing during the seizure of 227 kg of heroin by DRI. Eight-nine other accused, including two supposed recipients of the shipment, are expected to be arrested soon by ATS Gujarat.
Gujarat DGP Ashish Bhatia said the drug shipment was sent to the defendants by Pakistani drug lord Zahid Baloch and his brother Isa Rav on the Arabian Sea coast about 60 nautical miles near the international Indo-Pakistani maritime border off Jakhau. The drug shipment was originally supposed to be delivered to an African country but was diverted to Gujarat for reasons yet to be investigated.
According to ATS officials, the consignment of drugs was hidden near Salaya in Devbhumi Dwarka during the last week of October and then moved to the village of Zinzuda in Morbi, from where it was seized on Sunday. , said DGP Bhatia.
“Acting on the basis of intelligence generated by DSP (ATS) KK Patel, an ATS team led by SP Pinakin Parmar and DSP Bhavesh Roziya raided a house under construction in the village of Jinjuda and recovered 120 kg of heroin” said ATS DIG Himanshu Shukla.
Earlier, during the largest shipment of heroin to India in September, DRI seized around 3,000 kg of drugs, believed to have originated in Afghanistan and probably worth Rs 15,000 crore, from two containers at the port of Mundra in the Kutch district, Gujarat.
ATS sources said the latest shipment also came from Kandahar in Afghanistan and was smuggled from Pakistan to Gujarat.

A conspiracy hatched in a canteen in the United Arab Emirates
The plot to deliver contraband was hatched at a place called “Somaliya Canteen” in the United Arab Emirates, as in most cases in the past, an official said. Jodiya is believed to have visited the UAE during this time. The drug consignment was to be handed over to Indian traffickers for transport to an African country, in accordance with the modus operandi of drug traffickers from Pakistan and Iran of using Indian accomplices to smuggle drugs.

Jodiya and Bhagad diverted a shipment to Gujarat
In the present case, the arrested defendants, Jodiya and Bhagad, decided to divert the consignment, destined for Africa, to India and to steal it and sell it to drug lords in Punjab and Delhi. . “We have sent a team to both locations and we are coordinating with the local police to arrest the two drug traffickers.

Did the Pakistani army help Jabbar in drug trafficking?
According to ATS officials, about a year and a half ago, two Gujarat dhows, Noor-e-Panthjani and Rukansha Pir, were missing. “Noor-e-Panthjani is believed to have caught fire near Mombasa off the African coast. We were told that the same boat was heading for Gujarat with heroin. However, Jabbar anchored the boat in a small port near Karachi. He told the Pakistani army that there was a technical problem in the boat. The Pakistani army helped him with food, rations and also provided him with a new anchor. During his trip to Gujarat, Jabbar changed the name of the dhow to “Rukhansha Pir”, ”said a senior ATS official.

Jodiya misled intelligence agencies after cargo landed
ATS officials said that after the shipment landed in Salaya on October 26 and has already been transferred to Morbi, Jodiya himself gave false information to intelligence agencies about a shipment of drug that was to land on the coast of Gujarat. “It was done to distract from intelligence agencies,” the official said.
According to ATS sources, Bashir Khan, father of Pakistani drug lord Zahid, was arrested by Indonesian authorities with 600 kg of heroin and is currently languishing in prison. “After his father’s arrest, Zahid resumed drug trafficking and started smuggling drugs into India and some African countries,” said the ATS official.

Saiyed was paid 25,000 rupees to store his things
Sources in Gujarat ATS said Saiyed, who was a spirit guide to Jabbar, received Rs 25,000 from the latter to build a gate on his property. During the interrogation, it emerged that Saiyed did not know the contents of the bags.

Reflecting the huge amount of drugs entering Gujarat recently, the Narcotics Control Bureau (BNC) recorded the highest number of cases to date in Gujarat, all in 10 months of 2021. The DRI had seized 2,988, 21 kg of heroin concealed in the form of talc. stones at the port of Mundra in September during the country’s largest drug seizure.
NCB’s Ahmedabad unit, which recently moved to its new headquarters at the Ahmedabad-Gandhinagar border, filed 22 cases under the Narcotics and Psychotropic Substances Act (NDPS) from January to October 2021. It seized 523.09 kg of drugs and registered 49 people, including three foreigners.
The previous highest number of cases by BCN in a single year was 17 in 2018, a senior official said.
—Brendan Dabhi